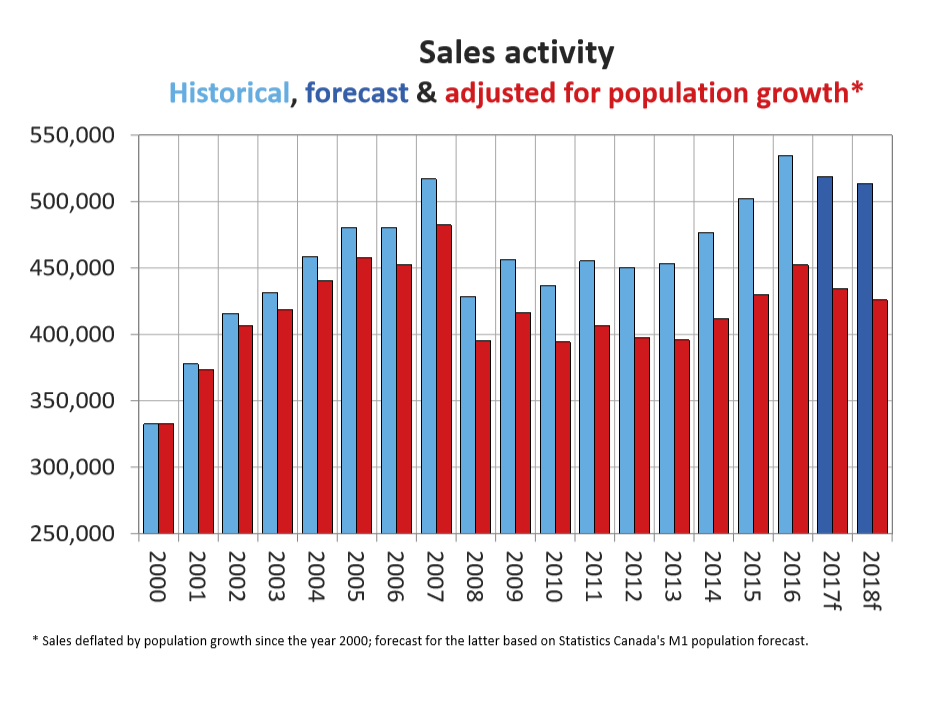 Posted at 12:58h in CREA News by superadmin 0 Comments
0 Likes

Ottawa, ON, March 15, 2017 – The Canadian Real Estate Association (CREA) has updated its forecast for home sales activity via the Multiple Listing Service® (MLS®) Systems of Canadian real estate Boards and Associations in 2017 and 2018.

In the resource-intensive provinces of Alberta, Saskatchewan, and Newfoundland and Labrador, sales activity is still running at lower levels and supply is elevated. This has resulted in weakened price trends for these provinces.

In housing markets around the Greater Toronto Area and including the furthest reaches of Ontario’s Greater Golden Horseshoe (the region includes the GTA, Hamilton-Burlington, Oakville-Milton, Guelph, Kitchener-Waterloo, Cambridge, Brantford, the Niagara Region, Barrie and nearby cottage country), the balance between supply and demand has become increasingly tight. This is expected to lead to continued double-digit price growth, resulting in further erosion in affordability and sales activity in the absence of a significant and sustained rise in new supply.

Elsewhere, housing markets in places like Manitoba, Eastern Ontario, Quebec, New Brunswick, Nova Scotia and Prince Edward Island have all experienced, to varying degrees, a breakout year in 2016 following a number of years of stagnation, with rising sales drawing down elevated supply.

Recently tightened mortgage rules, higher mortgage default insurance premiums and an expected rise in mortgage interest rates all represent headwinds to affordability in all Canadian housing markets. It will be some time before their full impact on housing markets is evident.

In some regions, the recently tightened “stress test” for mortgage financing qualification will force some first-time buyers to re-think how much home they can afford and may lead to a drop in home purchases as they shop for a lower priced home. In regions where there is a shortage of lower-priced inventory, some sales may be delayed as buyers save longer for a larger down payment.

In markets like Vancouver and Toronto, where single family homes are in short supply and there are few affordable options, some buyers may find themselves priced out of the market entirely. In Toronto, the stress test for mortgage qualification may prompt some buyers to move further out into communities located in the Greater Golden Horseshoe where homes are more affordably priced.

Nationally, sales activity is forecast to decline by 3% to 518,700 units in 2017. In line with CREA’s previous forecast, the upward revision to the sales forecast for Ontario offsets a downward revision to British Columbia’s.

British Columbia is forecast to see the largest decline in sales in 2017 (-17.5%), followed by Prince Edward Island (‑10.8%). Activity in both provinces is retreating from all-time highs reached last year. Newfoundland & Labrador is also forecast to see a decline in sales in 2017 (-8.4%), continuing a softening trend that stretches back nearly a decade.

Alberta is forecast to have the largest increase in activity in 2017 (+5%) that still leaves it nearly 10% below the 10-year average.

Elsewhere, sales activity is forecast to be little changed from 2016 to 2017. Ontario sales are forecast to rise by less than 1% in 2017, as strong demand runs up against an increasingly acute supply shortage.

In provinces where economic and housing market prospects are closely tied to the outlook for oil and other natural resource industries, average prices are showing tentative signs of stabilizing in Alberta while softening in Saskatchewan and Newfoundland and Labrador.

While prices are still rising rapidly in Ontario, British Columbia has seen a compositional shift in the average price that reflects softer sales activity in the Lower Mainland which has some of the most expensive real estate in Canada.

Average prices in other provinces are either rising modestly or holding steady, reflecting well balanced supply and demand.

The national average price is forecast to rise by 4.8% to $513,500 in 2017, with significant regional variations. The average price is expected to retreat by more than 5% in British Columbia as well as Newfoundland and Labrador, by 2.8% in Saskatchewan while rising by more than 15% in Ontario.

In other provinces where average price last year began showing tentative signs of improving, average price gains are forecast to hold below the rate of inflation in 2017 as the impact of recent regulatory changes and higher expected mortgage rates lean against stronger demand and tighter market conditions.

In 2018, national sales are forecast to number 513,400 units, representing a decline of 1% compared to the 2017 forecast. Most of the annual decline is expected result from fewer sales in Ontario.

Saskatchewan and Newfoundland and Labrador are projected to see average prices decline in 2018 by less than 1%. In most other parts of Canada, home price increases are forecast to more or less track overall consumer price inflation in 2018.