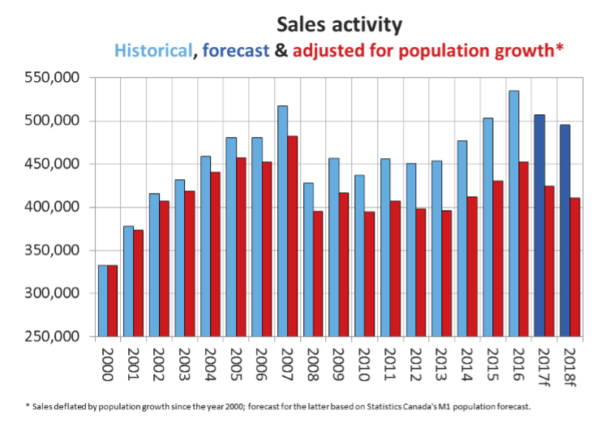 Posted at 12:59h in CREA News by superadmin 0 Comments
0 Likes

Ottawa, ON, September 15, 2017 – The Canadian Real Estate Association (CREA) has updated its forecast for home sales activity via the Multiple Listing Service® (MLS®) Systems of Canadian real estate Boards and Associations in 2017 and 2018.

In Ontario, housing market sentiment has sidelined more buyers than was previously anticipated following changes to provincial housing policies aimed at reining in housing markets in the Greater Golden Horseshoe region announced in April. Activity has begun to show tentative signs of stabilizing among markets in the region, but is down sharply since March amid a rapid shift in housing market balance and increased cautiousness among homebuyers. Because the region is home to a quarter of the Canadian population, changes in sales activity there have a large influence on results for the province and nationally.

The downward revision in the national sales forecast primarily reflects the drop in Ontario home sales, which are projected to rebound only partially later this year. Because home prices in the Greater Golden Horseshoe region are well above those in much of the rest of Canada, the decline in Ontario’s share of national sales is also responsible for much of the downward revision in the national average price forecast.

In British Columbia, activity appears to be stabilizing somewhere in between the highs of early 2016 and the lows of late 2016 and early 2017. Meanwhile, sales activity is still running at lower levels while supply remains elevated in the natural resource-intensive provinces of Alberta, Saskatchewan, and Newfoundland and Labrador. This has resulted in somewhat softer price trends in the two western provinces and more pronounced price declines in Newfoundland and Labrador.

To varying degrees, housing markets in Manitoba, Northern and Eastern Ontario, Quebec, New Brunswick, Nova Scotia and Prince Edward Island had a breakout year in 2016, with rising sales drawing down previously elevated levels of supply. Inventories in these regions have continued to decline this year.

Nationally, sales activity is forecast to decline by 5.3% to 506,900 units in 2017, which represents a drop of more than 20,000 transactions from CREA’s forecast published in June. The decline stems almost entirely from the downward revision to the forecast Ontario home sales. Sales in British Columbia and Ontario are both now projected to decline by about 10% in 2017 compared to all-time records set in 2016.

Newfoundland & Labrador is also forecast to see a sizeable decline in sales in 2017 (-8.1%), continuing a softening trend that stretches back nearly a decade. A smaller decline in activity is forecast for Saskatchewan (-4%).

Alberta is still projected to post the largest increase in activity in 2017 (+7.4%); however, the increase still leaves sales below the provincial 10-year average.

Manitoba and Quebec are the only two provinces expected to set new annual sales records in 2017, while sales in New Brunswick and Prince Edward Island are on track to come in just short of all-time record levels.

The national average price is forecast to rise by 3.4% to $506,700 in 2017. This marks a downward revision to the previous forecast, mostly reflecting fewer high priced sales in the Greater Golden Horseshoe region.

While Ontario is still forecast to post a sizeable year-over-year gain in 2017 (+8.7%), this is a large downward revision to the previously forecast increase.

Newfoundland and Labrador (-4.3%) and Saskatchewan (-1.6%) are the only provinces where average price is projected to decline in 2017, in line with elevated supply relative to demand in these provinces.

In 2018, national sales are forecast to number 495,100 units, representing a decline of 2.3% compared to the 2017 forecast. As is the case this year, most of the annual decline in sales next year reflects an expected decline in Ontario sales, with activity anticipated to remain well below the record-levels logged in early 2017.

Further expected interest rate increases will hold sales in check in the Greater Vancouver and Toronto Areas. As a result, the average price is forecast to hold steady in 2018 in British Columbia and edge back by 1.1% in Ontario.

In an extension of trends for 2017, average prices in 2018 are forecast to rise by more than the rate of consumer price inflation in Quebec and New Brunswick, decline further in Saskatchewan and Newfoundland and Labrador and either remain little changed or rise modestly next year in all other provinces.